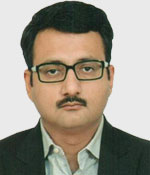 Yateesh Wahaal, who belongs to the second batch of Jaipuria Noida, is a man with several achievements under his belt. . An electronics and communication engineer by profession, he holds an MBA with a specialisation in Finance and Marketing. Jaipuria Noida introduced the PGDM programme after the batch of 2005-2007 graduated. He has also authored academic papers and is visiting faculty in a management school too. He is also a part of the IMT admissions committee and participates in the screening process and corporate interaction. He has always been close to academics and has done several other skill-building courses in India and abroad.

Currently, he is a Director at Pegasus International Advisory Limited, but reaching this top slot was not simple or straightforward. Pegasus is the culmination of a long journey that began with HDFC through his campus placement. From management trainee he soon jumped to the position of executive assistant to MD with Haier Appliances India Pvt. Ltd. This was a huge learning experience for him, especially in terms of the Chinese way of working. This job also gave him the opportunity to sit in on all core meetings, helping him understand strategy and research closely. His academic orientation and the papers he had written supported him in acquiring and then delivering on this job. He was able to bring significant insights to all situations being considered at the C-level and he made some important contributions. He moved on to work with MNCs and also did a stint in Oman.

Talking about his course at Jaipuria, he says, “I had just completed my engineering and was going to join Satyam. I had appeared for CAT but my bags were packed for Hyderabad. I was in Lucknow and my mother was with Dainik Jagran at the time. The college was new and she just walked in to have a look, was impressed and called me. I liked it too and filled up the forms. When I got through, I decided to join!” Yateesh calls it a stroke of luck and thanks his family for the support they provided.

According to Yateesh, Jaipuria provides the right platform to a student, a springboard to launch him into the working world. It’s not served on a platter and the student has to work hard and go that extra mile to make a mark in the industry. As Yateesh puts it, “If you have fire within, you will make it!”

He has now been recruiting students himself. His opinion is that it’s difficult to judge a student in the ten minutes of an interview. The written tests, group discussions and everything else adds up, but what also plays an important role is the faculty reference of a student. His advice to students is, “Networking with faculty is important, and then comes your personal conduct. The way you enter a room, take a seat, talk – everything matters! Language and communication are also deciding traits and you should work on them.” Yateesh thinks Jaipuria offers a fantastic platform and students should leverage it. It has the infrastructure and faculty to enable world-class education and training. He strongly recommends planning the future and working towards it.