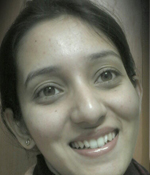 She wants her name inscribed on the honor roll of Jaipuria, Noida and she wants the coveted Gold Medal. Harshita Shukla is not one to rest on her laurels. She topped all the three semesters and nearly topped in all the individual subjects as well. This winner attitude has helped her bag a placement with Orient Fans, a CK Birla Group subsidiary. She is being taken up as a Management Trainee and will be given the opportunity to do project-based work in different departments. After this intense training and monitoring of one year, the company will decide which department she will be absorbed into. Harshita is excited about this great opportunity and shares, “My typical day at work would be working under the senior mentor assigned and delivering on the projects given.”

Placements time is a hectic and nerve-wracking one for the students. Sharing her experience, Harshita says, “The recruitment

process at Orient Fans was a four stage eliminative process. The first three rounds consisted of the Aptitude Test, Group Discussion and Interview and finally, there was a last interview with the Leadership team. The first three rounds were conducted in Lucknow as it was a pool campus and I had to compete with over 90 students. In the aptitude test, which consisted mainly of questions related to quantitative aptitude, 30 students were selected to sit for the next round, which was the group discussion. After the group discussion, 13 students got selected for the personal interview round. My topic for the GD was “FDI in Retail Is Good for the Indian Economy”. I must confess that the personal interview was a real stress test. I was bombarded with questions by a panel of three members who tested my knowledge, capacity to bear stress, etc. I was finally shortlisted for the last interview with the leadership team along with four other candidates. I was the only one to be shortlisted from the Noida campus. The last interview took place on 2nd Jan 2013, after which only two candidates were selected; luckily, I cracked it and found a place in the company.”

Harshita thanks her faculty at Jaipuria for the support and guidance she received in choosing the companies and preparing for them. “I especially would like to mention the support I got from Prof. Jones Mathew, Head of the Training and Placement cell. His backing was incredible and the entire T&P cell was present to solve all my issues”. The intense exercise of interviews and final placements creates a lot of stress and the backing of the faculty and staff creates a family-like support system for the student, something that Harshita is thankful for. “The faculty members had faith in me and helped me through all the stages of the process. My peers were always there to cheer me up, whether it was the first round or when I went through the tail end of the process. It felt like a family.”