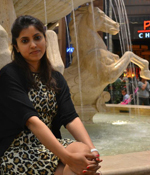 As Senior Manager – Business Development, Deepti Chandra Mehra is one of the driving forces behind various initiatives at the leading digital services firm of the country – Hungama Digital Entertainment Limited. She has been based at the Hungama headquarters in Gurgaon ever since making the shift from Zapak two-and-a-half years ago. Deepti has literally grown from a foot soldier to a General in the eight years since passing out of Jaipuria Institute of Management, Lucknow in 2005.

“After passing out of Jaipuria Lucknow, I grew from the ranks of a Management Trainee at Synergy Media, to handling the complete northern region – ideating, conceptualising and executing strategies and launches – for my set of clients. Quite a few of my campaigns have been rated ‘the best campaign of the year’.”

Deepti started her career in Digital Marketing, Online Ad Sales and Business Development, with the most basic and labour-intensive role – on-ground brand activation. In her first job after Jaipuria Lucknow with Synergy Media, she ideated and implemented numerous successful campaigns, including the on-ground activation of ‘Mountain Dew’ across markets in Rajasthan and Madhya Pradesh. As Manager – Sales with Sify, between May 2007 and October 2008, Deepti Mehra was awarded as ‘The Outstanding Performer’ for selling maximum sponsorships. She was also responsible for the optimisation of Sify‘ i-ways’ by offering the captive users as targeted youth for NOKIA’s on-ground activity.

Deepti’s shift to Zapak Digital Entertainment Ltd. coincided with the boom in Digital Marketing. During her almost two year long tenure, Deepti was responsible for some very innovative campaigns; for instance, the on-ground promotion of Airtel Broadband (‘Speed on demand’ campaign). This activity included novel concepts like gaming championships in residential societies across the country. Airtel also rewarded this as the ‘Best Marketing Activity of the Year’. Deepti Mehra was also the brain behind the launch of Exide tubular batteries for invertor, which garnered high levels of participation across locations. She also led a highly engaging ground activation drive for the launch of Yahoo’s new web page.

At Hungama Digital too, the awards have been coming thick and fast, including an ‘Employee of the Year’ at Hungama, for the Videocon Mobile Services ‘Zero Paisa Campaign’; which was also adjudged the best digital campaign of the year in 2010.
“The two years at Jaipuria Lucknow – the team work, combined projects, working odd hours to meet deadlines and working with a diverse set of people – actually prepared me to face the harsh advertising world.My professional experience has been a roller-coaster ride, a dynamic graph with an uphill curve. There has always been a new opportunity and a new task, which has always given a positive result. Jaipuria Institute of Management taught me something far more valuable than the curriculum. It taught me to believe in myself and be confident about what I’m doing.”

Deepti Mehra is in touch with most of her friends from Jaipuria Lucknow through social media.

“Whenever in Lucknow, I catch up with them at get-togethers. Ofcourse, we do keep in touch through phone calls as well. I always make it a point to attend Jaipuria Institute of Management events and get-togethers, to catch up with friends.”

Deepti believes that she is quickly reaching a point where her journey and learnings as a professional will translate into entrepreneurship.Over the next five years, she will beworking towards setting up her own E-commerce portal.

“In these times of tough competition, there will always be people eyeing opportunities to pull you down,” Deepti reminds her juniors at Jaipuria Institute of Management. “There will be many who will try to make you weak emotionally so that you crumble. Do not give in to the work pressure. Believe in yourself and strive towards your goals.”