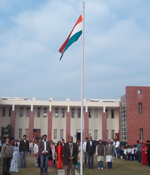 The tricolour was unfurled by Dr. J. P. Upadhyay, Director, Jaipuria Institute of Management, Indore, on the college campus and the entire congregation of students, staff, faculty and management sang the national anthem in unison. Sweets were distributed amidst joyous fervour. To mark its commitment to society and the future of the country, Jaipuria institute invited the children of the Dakachiya village as special guests for the occasion.

As the day progressed, both the old and young of Jaipuria family shared their vision for the country with great zeal and insight. Mr. Saumya Roy, who has varied experiences in the field of defence services, banks, educational institutions, NGO’s and theatre served as the Chief Guest for this patriotic occasion, he reminded the future managers that the issues, achievements and failures of India are the issues, achievements and failures of its people.

“Grow, and bring the change, that you want to see around you within yourselves,” Mr. Saumya Roy exhorted the students of Jaipuria Indore. “Study, go abroad and do well; but return to your country and feel responsible for it.”
Dr. J. P.Upadhyay, in his usual eloquent an evocative manner, described how ‘giving’ is directly connected to ‘life’ through the beautiful example of the Dead Sea.

“You may recall that the Dead Sea is a very unique water body in the world. Its salt content is so high that no living thing – plant or animal – can live in it. In fact, its density is such that a person will not sink in the Dead Sea, but will be able to float on its surface and perhaps even read a book. The reason for this, many scientists believe, is that the Dead Sea does not have a vent to further percolate the water that it receives from the Jordan River. The river Jordan is also a feeder to the nearby Island of Galileo – a place where organisms and plants of the rarest form flourish. In fact, it is a haven for life. Galileo shares what it has, and that adds to its prosperity. Without ‘giving’, the water mass in the Dead Sea has truly become ‘Dead’. Give back to your country and make it flourish.”

In their own turn, faculty members like Prof. Nitin Merh and Prof. Kanak Gupta spoke inspiringly. While Prof. Jagdish Bhagwat reminded the students of the importance of ‘learn, earn and return”, Prof. Romi Sainy recited a stirring poem that once againe reminded all present what India stood for.

Abhishek Singh, Aditi Sharma and Sanchayika Choudhary were the students from Jaipuria Indore, who expressed how ‘Gen Y’ feels about the nation. It was heartneing to observe how zealously the students spoke about taking India to its rightful place on the world map.

This was followed by an open house debate on what proved to be an extremely thought-provoking affair – ‘Republic Day is Merely a Symbolic Holiday for Gen Y’. It brought out with soul-searching clarity how ‘Gen Y’ has realised its casual attitude towards its country. Many spoke for the motion with stark honesty, accepting their ignorance and apathy towards the importance of the day, and India’s uphill climb to its present position.

The 64th Republic Day gave Jaipuria Indore family renewed vigour with which to be vigilant against corruption, respect the women of the country, and protect and prepare the children for the future, while also taking care of the aged.