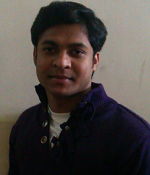 Ashish Nayan has become a part of the history of Jaipuria Institute of Management, Lucknow. Ashish, who has been placed as Management Trainee – Marketing, at Polyplex Corporation Limited, is the first student of the 2011-13 batch to be placed. Polyplex is the world’s fourth largest manufacturer of thin polyester film, with manufacturing facilities across India, Thailand and Turkey.

“I will be joining Polyplex Corporation as a Management Trainee. On the completion of my training period, I will be handling B2B Marketing as a Manager. My role at Polyplex will include handling current customers, increasing the sales of Polyplex by targeting prospects and developing new business opportunities in the market.”

Ashish points out that although around five companies had visited the Jaipuria Lucknow campus before Polyplex Corporation did, the selection process was speedier for Polyplex, bringing him the honour of being the ‘first-placed’ of the 2011-13 batch.
“The GD & PI process was conducted in a really smooth way. The recruiters representing Polyplex were thorough professionals who were absolutely clear about the kind of person they were looking for. They were very supportive right through the process.”
Ashish Nayan believes that the credit for his placement goes entirely to the faculty and his colleagues at Jaipuria Institute of Management, Lucknow.

“The support provided by the faculty throughout the placement season was exceptional. It helped me a lot during my placement process. The continuous interaction with my mentor, Dr. Vir Ved Ratna – Professor in Strategy and Marketing at Jaipuria Lucknow – gave me immense confidence during placements.”

With his own placement decided, Ashish is now assisting his batchmates through mock interviews and practice GDs. He acknowledges that Jaipuria Institute of Management has been a great RoI (Return on Investment) for him in every way. A placement in a company of the stature of Polyplex Corporation has been a great confidence-booster for him. Ashish’s affection and respect for Jaipuria Lucknow is deep-rooted, almost to the extent of worship. With a great performance on the academic front as well as contributions to almost every cultural activity during his time at Jaipuria Lucknow, Ashish has been one of the star students of his course.

“It was not simply that I was very good so I did well on all fronts; it was Jaipuria Lucknow that provided me with those opportunities. You’re at Jaipuria Lucknow for your PG – there is no place for spoon-feeding. It is a perfect environment for a PGDM. There are daily assignments of some sort or the other that keep you clued-in.”

Ashish is positive that with the number of companies visiting the Jaipuria Lucknow campus, this year is going to see record-breaking placements for them.