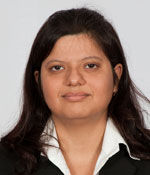 At the recent farewell party for the batch of 2011-13 of Jaipuria Institute of Management, Jaipur, Priyanka Khatri easily stood out from the crowd. She was in the unique position of attending her farewell party at Jaipuria Jaipur as a full-fledged employee of India bulls Real Estate Limited. Having found in her the right fit for the profile of a Relationship Manager, the recruiters from Indiabulls wanted Priyanka to join on the 1stof March, 2013 itself.

“You see, Jaipur is projected as one of the ten mega-cities of the India of the future,” elaborates Priyanka on the reason behind this urgency on the part of Indiabulls to see her on their rolls. “While real estate companies are working overtime in an attempt to push the limits of Gurgaon on the NH 8 – even beyond Manesar – the fact of the matter is that the next boom lies only in Jaipur. With a formidable infrastructural and business backbone and real estate not as expensive as in Gurgaon, Jaipur is quickly surfacing as a major IT destination. Prestigious projects, including Mahindra’s 3,000 Acre SEZ, Anil Ambani’s Mega City Development Plans and Hero Honda’s Rs 700Croreplant are well on their way.”

Barely two weeks into her job, Priyanka is already in the thick of things at the Indiabulls office in 8Jaipur.

“As a Relationship Manager in the real estate department,my work involves creating new contacts and pitching our real estate projects to them. I am already working on finding prospects for eight different projects, in and around Jaipur.”

The Indiabulls recruitment process, conducted on-campus at Jaipuria Institute of Management, Jaipur, was an elaborate 3-stage affair. The first stage was a GD. Priyanka’s group was given the topic “Can Narendra Modi be a good PM or not”. She followed up a strong performance in this GD with back-to-back Personal Interviews.

“The good thing about the Indiabulls recruitment at Jaipuria Jaipur was that all the three stages were conducted in just two days. The process began on the 3rd of January 2013, and by the end of 4th of January, I had the offer letter in my hand, asking me to join on the 1st ofMarch 2013. Had it not been for the fantastic support from my faculty at Jaipuria Jaipur I would’ve been lost at the speed of the GD and interviews. Before every stage, my mentors would help me regain my composure. Instead of worrying about what had passed, they would help me focus on the next stage. I still remember Prof. S.P.Garg’s advice before the PIs, which helped me get an idea about where the real estate business was headed, particularly in relation to Jaipur and Rajasthan.”

Priyanka Khatri feels that she has upheld the trust of the Director of Jaipuria Institute of Management, Jaipur.

“I remember how Dr. Rajiv Thakur, the Director of Jaipuria Institute of Management, Jaipur, conveyed his happiness over the positive change that had come over me after my SIPwith Bonanza Medical Tourism. He has been very motivating for all of us, and was very happy to see me at the farewell party – well placed and enjoying my work at Indiabulls.”

Priyanka believes that this is not the end, but just the beginning of her connection with Jaipuria Insititute of Management.