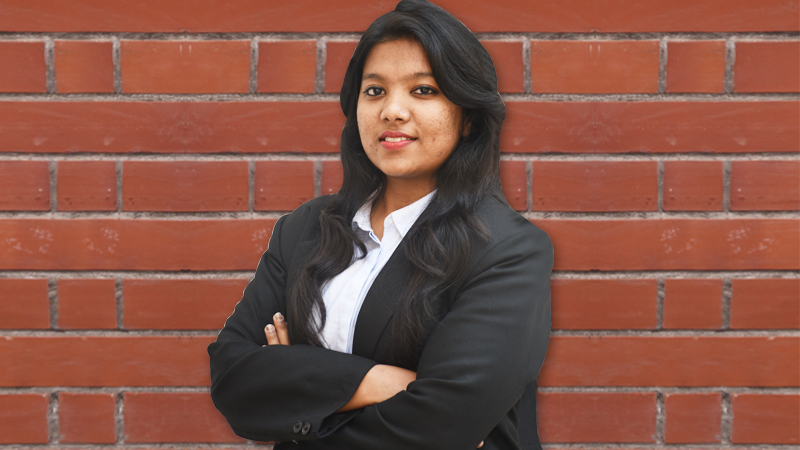 Ritika has an amazing personality about her that makes her stand out in a room full of people. She is driven and likes to stay on top of her game- since her childhood. It wouldn’t be incorrect to describe this girl as a perfectionist in making. Her energy, her ambitions coupled with a passion for achieving more have made her stand out in numerous ways as she carries a versatile personality and why do we say that?

Ritika appeared for her summer internship program with HDFC Bank in the year 2018 and cracked it right at the first go. The amazing part about it is- it was the first company she has ever interviewed with. She wrote a research paper and presented it in front of an entire panel at IIT Kanpur. Her paper was even selected and published in Scopus Indexed Journal. She further moved on to publish her second research paper, which got an overwhelming response at IIT Allahabad. Ritika has also won the second prize in dance competition organized at Jaipuria Institute of Management, Lucknow. It did not stop there! She even associated herself with various clubs and committees at Jaipuria Institute of Management alongside continuing to score a remarkable CGPA throughout 2 years of her PGDM. And while final year students were busy with the placements on-rush, Ritika was already sitting on a pre-placement offer from HDFC Bank. This is the magic of Ritika Agarwalla, PGDM student of Class 2019, Jaipuria Institute of Management, Lucknow!

But what has been the highlight for this young dynamo so far? “My research papers actually!” exclaims Ritika with a broad smile on her face. Ritika’s first research paper on –“Earnings Management, Capital Management and Signaling Behavior of Indian Banks”, co-authored alongside two other batch-mates had her amazed by the world of research and publishing. She got absolutely thrilled on being a published researcher as a PGDM student and in her words- ‘It was as if a whole new world of possibilities opened up.’

In 2018 HDFC Bank had arrived at Jaipuria Institute of Management, Lucknow to hire summer interns. Vetting Ritika’s soft skills, domain expertise and aspirations, she was hired almost instantaneously. ‘My internship was in sales and operations. I was taught all the operational work of the bank and was also asked to sell its specific products. I can’t really say for sure what I did right but I was dedicated and punctual at my work. I think that worked out well in my favor,’ chuckles Ritika while explaining how the PPO came her way. Ritika is now all set to join Noida branch of HDFC Bank as a Relationship Manager.

So how does Ritika think her faculty and classmates will remember her? ‘I guess they will remember me as a hardworking and dedicated individual. A student who never has a NO for an answer.’ And, does she feel prepared enough to join one of the leading banking institutions of the country? Pat come her reply – ‘Oh, indeed! In the last two years of my PGDM I got ample opportunities and exposure to learn from industry veterans and academics. Jaipuria Institute of Management provides the students with everything that is needed to make their mark in the world.’