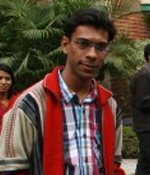 Jaipuria Institute of Management Noida alumnus Romil Jain, entrepreneur and Director of Meenakshi International, visited his alma mater as a guest lecturer, to speak on plastics and judge the initial action in the institute’s war on plastics. Jain, whose company has developed an oxo-biodegradable plastic product, said he found plastics were a major concern when it comes to products adversely affecting the planet and worked with Wells Plastics UK, to come up with a creative alternative. Plastic is a major industry in India, he said, pointing to the Plastindia 2012 Eighth International Exhibition and conference to be held in New Delhi February 1-6.

In India, he said, plastic consumption has increased from 7.5 million tonnes to 15 million tonnes and the country will become the third largest consumer of plastic in the future. Consumption of plastic has grown and the concerns center around the disposing of the product, he said, but the industry is coming up with new technology to help people and to use plastic in a better way without harming life on the planet and jeopardizing society.

Speaking on life out in the business world, Jain said it is a matter of survival of the fittest. Tough competition exists he told students and if practical knowledge is not present, a student will suffer as he will switch jobs and will not be able to learn anything.

He stressed the need for practical knowledge but also said self evaluation is important, noting everybody works individually and a person should have good knowledge and personality to succeed in the long run.

Jain said his working motto is “plan not for today but for tomorrow” and told the students to never be afraid of hurdles – every problem has a solution.

“Just believe in your own self and be positive,” he said.

As for his success, he gave credit to the Jaipuria Noida faculty, his colleagues, the college environment and awesome opportunities which he received. As the first student to go for an exchange program in Finland he thanked Dr. J.D Singh, Director of Jaipuria, for making the impossible possible.