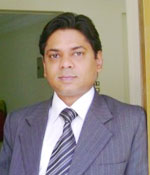 Sajid Mansoor is Assistant Vice President, Liquidity Reporting at HSBC Bank’s Global Finance Centre at Gurgaon, which is a captive unit of HSBC Bank. He’s been with HSBC for just over a year-and-a-half, and yet is widely recognised as a man with remarkable subject knowledge, and with good influence on his peers and subordinates – mainly due to his amicable nature and integrity. Wherever he has worked, Sajid’s ability to take challenges head-on has earned him great respect. Sajid believes that it was Jaipuria Institute of Management, Lucknow that honed the positive side of his personality into winning assets.

“I passed out of Jaipuria Lucknow way back in 1997, as a part of its first batch. Ever since, I’ve had a few opportunities to go back to the sprawling, well-equipped college that it is now; but in our days we did not have dedicated premises. What we did have, though, were dedicated teachers like Professor Musanna. Jaipuria Institute of Management, Lucknow worked extra hard in ensuring that not only did we receive quality education, but we were also taught how to prepare ourselves for the challenges in life on the professional front. Jaipuria Lucknow went out of its way to bring us the best visiting faculty and arrange fantastic industrial visits, providing us practical insight into the corporate world.”

After completing his BSc (Honours) from the Aligarh Muslim University in 1995, Sajid decided to go for his MBA straightaway. Jaipuria Lucknow was just starting out that year. It was a big risk for him but, according to him, it paid off big time! Today, Sajid feels privileged to be a part of the Jaipuria Institute of Management family, though he does regret the fact that he has not been able to do much for his alma mater.

“If I am given an opportunity to be of service to Jaipuria Institute of Management, I would love it. It is because of Jaipuria Lucknow that I’ve had the pleasure of being a part of the most respected corporate houses in the Finance and IT sectors such as National Housing Bank (Delhi), Oracle Financial Services (Bangalore) and now HSBC Group (Gurgaon). My career has turned me into a globe-trotter; I have visited countries like Malaysia, Jordan, Egypt, UAE, UK, etc.”

In fact, even in his current profile, Sajid Mansoor heads the Liquidity Risk System Implementation in the North American Region (USA and Canada) for HSBC Bank.

“Jaipuria Lucknow taught me that the best way to do a job is to understand it, stick to it and put in my best efforts. Frequently hopping jobs would’ve made this difficult. That’s why I’ve served for long periods with my previous organisations – more than 8 years with National Housing Bank and about four-and-a-half years with Oracle.”

Sajid is in constant touch with his batch-mates from Jaipuria Lucknow, mostly through phone calls or professional networking sites. He has attended a couple of Alumni meets in Delhi and Noida and never misses an opportunity to meet up with his closest batch-mates and members of the faculty from Jaipuria Lucknow. He also makes it a point to visit the Jaipuria Institute of Management campus, to meet the faculty, whenever he is in Lucknow.