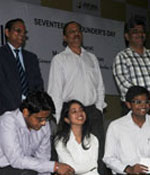 Speeches, cultural events and awards were the highlights at the celebrations as Jaipuria Institute of Management, Lucknow marked its 17th anniversary on the 8th of September – Founder’s Day..

Welcoming all to the celebration, Jaipuria Lucknow Director, Dr. S.R. Musanna outlined the history of the institute from its initial batch of 60 students to its most recent one of 300, and noted that there are now branches of Jaipuria Institute of Management in four cities.

Chief Guest at the event, K. Ramachandra, Chief General Manager of State Bank of India, told students that the three important things they should concentrate on are: communication, presentation and networking. He said that, students should learn the value of money and urged them to travel more as it is valuable to learn about different cultures.

Cultural events highlighting the Founder‘s Day event included: a musical play on the history of Jaipuria; a classical dance by Neha; a special dance performance by second-year students; Ganesh Vandana and a Punjabi dance performance.

Founder’s Day was also a time for awards and the distribution of prizes.

The standings of toppers in the PGDM went to: First – Bhagwati Prasad Gupta, Second – Juhie Gupta and Third – Nikhil Singh, with the top positions in Financial Services and Retail Management going to Bhoomika Agarwal and Nitin Tiwari respectively.

Ajay Wadhwa and group took the top spot for the Marketing club, with Vargav Varadwaj and group coming in second. For Vision 700, it was Vargav Varadwaj first, Akanksha Srivastava second and Randhir Thakuria third.