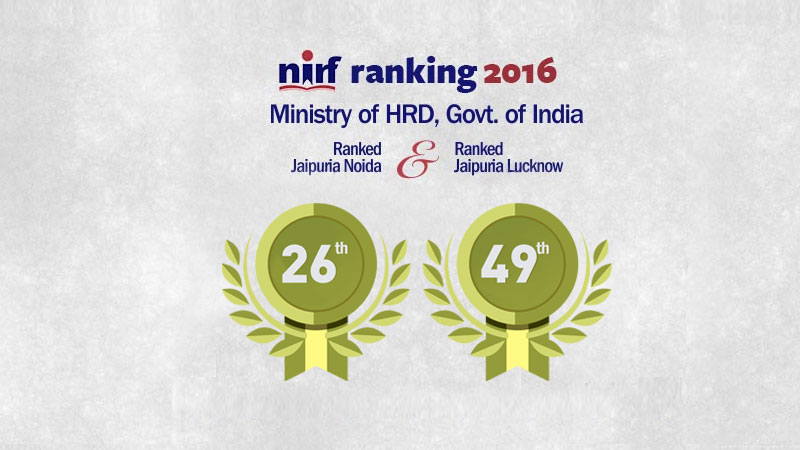 Jaipuria Noida was ranked 26 and Jaipuria Lucknow was ranked 49 at the all India level including all IIMs. Moreover, these institutes have been ranked 10 and 16 respectively at the North India level, thus reinforcing the positioning of Jaipuria Institutes as one of the best management institutes in the region. The ranking is available at https://www.nirfindia.org/mgmt

The NIRF has been approved by the MHRD and launched by Hon’ble Minister of HRD on 29th September, 2015. This framework outlines a methodology to rank institutions across the country. The parameters broadly cover “Teaching, Learning and Resources,” “Research and Professional Practices,” “Graduation Outcomes,” “Outreach and Inclusivity,” and “Perception”. Further details of the ranking methodology for ‘Management Institutions’ is available at http://www.nirfindia.org/Docs/Ranking-Framework-for-Managment-Institutions.pdf

Commenting on the release of the rankings, Shreevats Jaipuria, Vice Chairman said “the ranking is a validation of Jaipuria’s legacy of excellence in education dating back to 1945. Today Jaipuria Institute of Management is one of the largest groups in northern and central India to offer AICTE approved PGDM programmes at four world class campuses in Lucknow, Noida, Jaipur and Indore. The ranking is also a testament of Jaipuria’s commitment to provide transformational education and the quality that it assures year after year. The rankings will also motivate us to continuously upgrade and upscale the quality and spread of our educational endeavor.”

The rankings are an additional feather in Jaipuria’s cap. Established in 1995 and 2004 respectively, Jaipuria Noida and Lucknow has, in a short span of time, achieved the distinction of being counted among India’s top business schools. They are NBA accredited for all their PGDM programs. Jaipuria Noida and Lucknow are also accredited as a ‘Grade A’ institute by the National Assessment and Accreditation Council, better known as NAAC. The PGDM programs at Jaipuria Lucknow and Noida has also been granted MBA equivalence by the AIU (Association of Indian Universities).