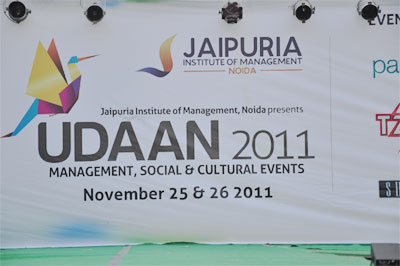 Students from across the nation are gearing up for the event of the year: Jaipuria Institute of Management’s fabulous Udaan. On 25 and 26 November. From morning until evening, cash prizes wait to be won.

The plans are made and the preparations are in full swing for this is Jaipuria Institute of Management’s biggest event of the year. These two days are a time when management techniques and leadership skills are called upon. Stress? Sure. But adrenaline highs are ensured.

No need to register in advance. On the spot registrations are in the scheme of things. Any number of teams from any number of colleges can participate. No restrictions. Each team will pay a reasonable participation fee and be ready to move it, groove it and win it.

A glimpse of what will be the scene on Day 1 of Udaan 2011:
Jigsawmania: like the name suggests this is going to be a Managerial jigsaw with a difference. Off the beaten jigsaw track. In Round 1 participating teams of two members each, will be given a jigsaw. But with a twist. Some of the pieces will be mixed up with ones belonging to other teams. The teams that win this round will qualify for the next one: a buzzer quiz round. Winners will win exciting cash prizes.

Genesis: is all about ideas that can change lives. So let the innovative thinker in you surface. Take charge of it and make it happen. Because the Next BIG idea can take home the first grand prize of Rs. 30,000! It comes from a sponsor – IIM Bangalore.

Singing can be beauty for the ears. Symphony lets competitors show off the melodies in their voices.

Some love to be heard and not seen. They like making waves on air and playing other people’s songs. It is an art form that needs perfecting the gift of the gab. So gabbing their way to success can be a change in the career course. Radio Mania is just the competition for aspiring RJs. Let the beat groove you on.

Debates get passionate, they get angry arguments defy all reason. And the winner truly deserves the prize. It is a battle of wits and words at Crossword.

Painting, anybody? This one’s easy because it is on T shirts and is called Poor Picasso. Have fun, let the paint out of the tube, use your brushes, fingers, cotton buds, make the imperfect picture if you like – Picasso style.

Cataclysm: may the best gamer win. Cataclysm is all about gaming the management way. It’s on the computer and is absolutely charged with the speed of lightning.

Pan Galactic is a CSR initiative and is a short film making contest.

Kolam: India is a land where colours are used everywhere. Including in artistic designs on the floor. Whether it is with a stark white powdered rice used traditionally in the south and called Kolam or made using the colours of the rainbow and called Rangoli.

Yes, there’s lots of fun lined up and lots of intellectual stimulation too. Be there. Do that. May the fastest and the best team win.