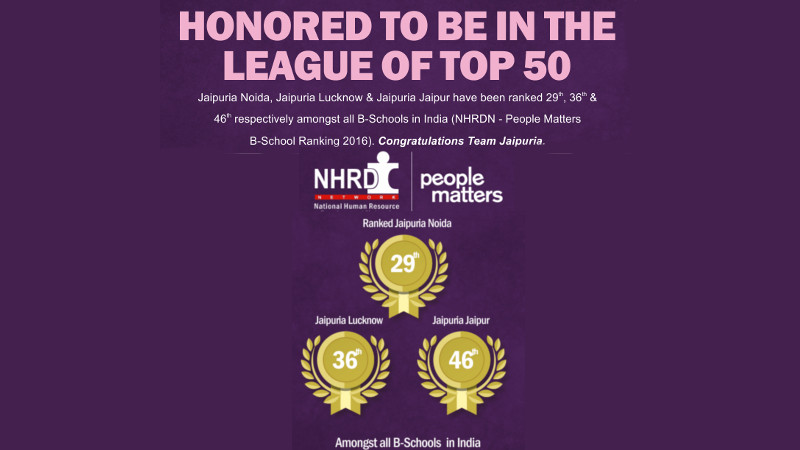 Jaipuria Lucknow, Noida and Jaipur have been ranked among the top-50 B Schools in the country by NHRDN ( National Human Resources Development Network) and People Matters B School ranking 2016.

The fourth edition of NHRDN B school ranking was evaluated, scored and ranked across 10 key parameters. It not only gives holistic ranking to the best management education institutes in India, but also ranks them based on standard parameters.

The ranking is a testament of Jaipuria’s commitment to provide transformational education and the quality that it assures year after year.

Jaipuria Jaipur launched Winter Internship for Societal Happiness (WISH) program under the MoU with 10 prominent NGO’s in its 10th Foundation Day on August 28, 2016. Two social awards “Veera” and “Laado” were also instituted on this occasion. The first award was conferred upon two social workers Prashant Blood Donor for Veera and Laado award to Manjeet Kaur.

Shri Rajendra Rathore, Cabinet Minister, Health & Medical and Parliamentary Affairs was the chief guest on this occassion. Shri Rathore, congratulated the institute on completion of a decade. Addressing the students he said, “Youth has responsibility towards nation building, and education rooted in societal concern will make our youth contribute to society.” He further remarked that youth are full of potential and enthusiasm and so they must direct their energies towards a positive approach.

Dr. Prabhat Pankaj, Director Jaipuria, Jaipur warmly welcomed all the dignitaries, Founder Director, Dr. Subhash Datta, Alumni’s and representatives of various NGO’s. He narrated the journey of 10 years of Jaipuria Jaipur. He remarked that the institute is marching upwards and this is being reflected as Jaipuria, Jaipur has been adjudged as the Best Emerging Business School by the NHRDN – People Matters survey in 2015, placed along with IIM-Ranchi and IIM- Kashipur.

A Souvenir ‘Journey of a decade’ was also released on the occasion by the dignitaries. Founding Director Dr. Subhash Datta was felicitated for his remarkable contribution to the institute. Dr. Subhash Datta in his address said that he is proud to see that the initial decade has brought laurels to the institute.  He further remarked that “Setting up this institution was not a project, it was beyond that.  Time has passed like battling an eye. It’s really wonderful to see the institute flourish to what it is today and inched forward towards realising the dream of creating a globally recognised and socially responsive business school by the visionary Chairman of the Jaipuria group of Institutions.”

Sadda Haq fame of Channel V, Celebrity Harshita Gaur interacted with students and shared her life journey and learnings.  She urged the students that “If you believe in something work hard and you will definitely get success.”  The programme proceeded with mind blowing performances like singing and dancing.

The foundation day ceremony culminated with the vote of thanks by Shri Shreevats Jaipuria who committed to set new benchmarks nationally and internationally.