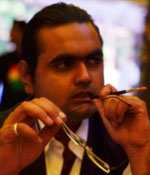 Swapnil Tiwari is a sharp businessman even if he claims to be ‘not so good’ with Finance! The business, however, is not a strictly financial venture. Founder Chairman of Naked Colours, Swapnil explains that his venture is working in the sectors of poverty alleviation, opportunities enhancement and preservation of ancient art forms across ancient tribes and cultures in India. “I use creativity for social good. Focused mostly on Naxal-infested areas, the venture intends to save art forms and the culture of ancient tribes from extinction, through innovation in those arts and finding them a viable market.”

Working on the maxim of ‘Be the change you wish to see in the world’, Swapnil set up his business to offer services in five verticals – Neo Indus Arts, Psyche Art, Freethot Business, Freethot Education and Naked Colours Innovations. He incorporates innovation in all strata of his business, especially in product, service, advertising and HR development. An entrepreneur at heart, Swapnil completed his PGDM from Jaipuria Noida in the year 2007. He was selected as a Marketing Officer at Bank of India and had spent 7 months on the job when his entrepreneurial spirit took him to his destiny. He first experienced the joy of entrepreneurship by participating in a ‘Business on Campus’ competition organised by NEN at Jaipuria Institute of Management, Noida. Ever since, NEN has been an inspiration and a silent support to Swapnil. In an interview, he said, “The fact gave me courage in tough times, that there are people out there who understand the worth of an idea and the purpose of a thought.” NEN, Swapnil says, is his Dronacharya.

Swapnil is an artist himself, with more creative than analytical skills. However, he built up his management and business skill base to recognise the gaps in the market for art. ‘Sarv Managalam’ or ‘Good for All’, drives this man, who grew up with dreams as his constant companions. “With great power comes great responsibility. And with this thought, I decided to invest my power of creation towards a greater good – Naked Colours was born.” Swapnil believes that Jaipuria helped him become market-ready, specifically the training and mentoring that he received. He says that the faculty at Jaipuria helped him and guided him through the process of placement. “Commencing from the initial GD preparations to the interviews, we all had hand-holding training sessions. We were quite ready to face the real fire.”

Through his ventures – Naked Colours, 3 patents, 28 Copyrights, India’s first Hinglish novel in writing – Swapnil has achieved a lot in his young life. His passion drives him, and his advice to his juniors is, “The biggest power lies within you. Never lose belief in yourself. The biggest inspiration lies within you. Search for that and pursue your dream”.