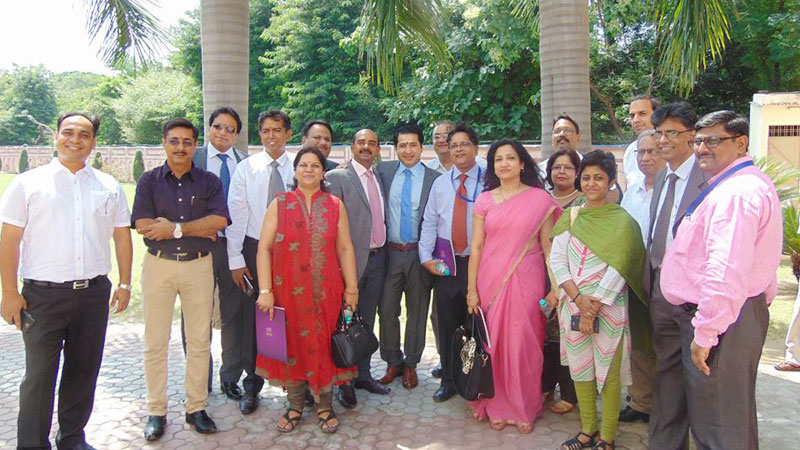 The 20th Foundation Day celebrated at Jaipuria Institute of Management, Lucknow between the 6th and 8th of September turned out to be a homecoming of sorts for the institute’s alumni. The celebrations were attended by a “who’s who” from the corporate world and academia, and many of those names were homegrown talents who had gone on to scale greater heights of success. They came back to the campus of their alma mater to relive their memories with their peers, friends and faculty members, while also sharing their experiences with the students of today.

When it came to alumni, one name that stood out was that of Mr. Anand Narain Kapoor, Vice-Chairman of MiDCOM Group, a USD 1.35 Billion conglomerate. He made his presence in the “A business tea party cum interactive discussion” and the session “Teri Meri Baat” that had alumni engage in an exciting discussion for the benefit of today’s students. Along with his Managing Director and co alum, Mr. Akash Kumar, Mr. Kapoor also made it to the alumni panel, which will ensure that he will play an integral part in some of the institute’s future endeavors as well. While addressing the students, Mr. Kapoor said “I am very happy to see the way he (Mr. Sharad Jaipuria) has driven the growth and quality of education in different parts of India, from the schooling level to the management level.”

The celebrations had brought together alum right from the first batch of the institute to the latest. Those who were there when it all began were impressed and took pride in the achievements of Jaipuria, Lucknow. Smita Singh, alum Batch 1997, is an Asst Prof. with the University of Lucknow and has had an interesting career in both the corporate world and academia. “I have been visiting the campus every year as it’s a conscious decision to be involved with everything the institute does. I appreciate the way Jaipuria, Lucknow has grown and it makes you feel like you are growing with the institute,” she said with a beaming smile on her face.

Clearly, the institute has gone on to create beautiful memories for these alumni, who were seen sharing them as they mingled with the guests during the events. They were also grateful to the institute for helping them start off their careers on the right note. After graduating from the institute in 2010, Ms. Neha Chabbra has taken to academics and is a lecturer at BBDNITM. According to her, “Jaipuria has a strong reputation in the market and students from the institute get a lot of respect in the professional sphere. The practical aspects you learn at the B School play a huge role in your career.”

There were several activities like sports, music and more that allowed the alumni to let their hair down and have a lot of fun on their favourite campus. Some of them were returning to it for the first time since they graduated and were filled with emotion going down the memory lane. Mr. Pankaj Maheshwari, alum Batch 1997, Sr. Consultant, SAP SD, was one of them. “I am coming back here after April 1997 and definitely feeling nostalgic. The institute has grown so much, be it infrastructure or reputation. It was like my home and it’s a very emotional to return for an occasion like this. Hopefully, we will be back soon,” he concluded echoing the thoughts of one and all present for celebrations.