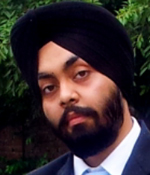 Guneet Singh Ahuja landed up at Jaipuria Institute of Mangement with the clear objective of studying in one of the best Management colleges in India. Looking back at that time, Guneet says, “I wanted to secure my future and Jaipuria’s reputation and its faculty profile convinced me I wanted to be here”.

Guneet loves swimming, singing, dancing, cooking and playing outdoor games. Like a lot of youngsters today, his life is fast-paced and he is greatly involved with shooting and editing his own material as well. Hailing from Amritsar, he did his HSc from Springdales Senior School, Amritsar and his graduation in B.sc (Hons.) Economics from Guru Nanak Dev University, Amritsar.

“I am enjoying every moment of my life at Jaipuria”, says a visibly excited Guneet, who has been involved with several activities in the first year. He is the Student Point of Contact (SPOC) in the MRC (Media Relations Club), which he claims to enjoy the most among all the activities he has been a part of. He is also the yearly co-ordinater of the institute’s E-cell, a member of NEN (National Entrepreneurship Network), campus committee co-coordinator, Marketing, club member of the industry interface team, member of the placement committee, and the vice-coordinator of table tennis and chess. However, it’s hostel life that is giving Guneet some of his most cherished moments of college life. “I will always remember my birthday this year, which was celebrated with great enthusiasm by everyone in the hostel!”

Guneet aspires to be placed in an MNC or a prestigious Indian company in the next two years. His dreams are strongly supported by his efforts and the institute itself. “I feel it’s the faculty here that has prodded me on the path of learning and pushed me to explore my own potential. The depth of the course and its structure are pillars that uphold learning for me.” He compliments the faculty further, saying that they are “fantabulous”. He thinks their way of teaching, communicating and guiding students is incomparable. “Moreover”, he says, “the faculty here stresses on case analysis and applications-based concepts, which is really helpful in converting a book-worm or a geek into a manager, as it compels you to think smartly and out of the box”.

Placements now loom large in Guneet’s mind and he is confident that he will be selected by one of the many reputed companies that visit Jaipuria. He appreciates the teaching pedagogy at the institute and feels motivated; in short, after his stint here, he is ready to face the corporate world.