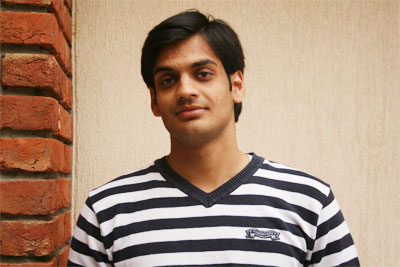 Kush Kaushish, a PGDM student (2010-12 batch) of Jaipuria Noida, has been offered a place at Deloitte.Kush specialized in Marketing and Finance and his position in the company will be that of a tax analyst. Being chosen by the first company to visit the campus this year is obviously an achievement for this Delhi guy.

What could have put a damper on Kush’s career plans is that fact that the position is in Hyderabad. However, he realizes how opportunity doesn’t knock twice so he is willing to relocate and will be joining the organization coming August.

Ask him how he prepared for the interview and his answer comes as a surprise. Kush says he was aware that the company was looking for someone with a solid grounding in taxation. He says whatever little he did study was about the tax laws in India. However, Deloitte was on the lookout for someone conversant with the US laws. At the same time, they wanted someone with strong accounting skills. That’s where Kush’s commerce background stood him in good stead. As for the interview,Kushsays he didn’t stress too much over taxation but chose to hone his communication skills.

While he’s been offered Rs 4.2 lakh p.a. as starting salary, he says two years down the line, he sees himself as a tax analyst- Grade II.

About his last two years at Jaipuria,Kus hsays when he joined the institute; he had six-month work experience with Naukri.com. However, he wanted a career in finance. Jaipuria Noida is the best B-school in the NCR with the best faculty for finance in the entire region, he says. He has gained both the theoretical and practical knowledge of the domain. For his internship,Kushcaught the eye of one of the visiting faculties and found a place for himself at Indagadio Research where he interned for 10 weeks.

Kush says of the time he spent at Jaipuria Noida, only 50% of it went in studying. The rest of the time, he was either coordinating or participating in sports or co-curricular activities. This, he says, is one of the best things about the institute. Jaipuria Noida is constantly growing, re-inventing itself. A case in point, the institute has done away with its earlier grading system which was absolute. Now, it is relative.

Even among all the Jaipuria institutes, Kush says that his alma mate( Jaipuria Noida) is the best. In fact, he adds, that students from Lucknow and Jaipur, if they haven’t been placed, come all the way to Noida.