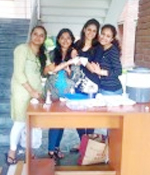 They say that a journey of a thousand miles start with one small step. For the four of us – Eureka, Lidiya, Shubhanshi and Smriti Pandey – our ‘Friendship Day’ business venture started out as just a casual chat. On the 31st of July, 2012 there was a small charity event being organised by the students of Jaipuria Institute of Management, Noida. The four of us thought that it would be a good opportunity to test our managerial skills – to put our ‘bookish knowledge’ to practical use.

The first thing was to decide on the products that would form a part of our ‘Friendship Day’ stall. The major challenge was to select products that would attract people to our stall, without making them feel that they were spending too much money. We decided that cakes, juices and Swiss chocolates could be sold in no time, even in unsure market conditions. As a high-risk-high-gain part of our stall, we included a few friendship bands, counting them straightaway as ‘bad debts’.

Next, we gave the location some thought. July falls bang in the middle of the monsoon season, so we chose a location in the vicinity of the Jaipuria Noida Mess.. We reasoned that it was a place that every consumer would have to cross before going in for lunch.

The pricing was the point which generated the least debate between the four of us. Our focus consumers were mostly students, and we knew exactly what their average pocket money and willingness to spend on a particular product would be. We priced the chocolate cake at Rs. 20/- and the pineapple cake at Rs. 15/- a slice. Juices were priced at Rs. 20/- per glass.Having taken care of the basics, we got down to the creative part – Promotion. The 31st of July was a Tuesday, so we began Promotions for our stall on Saturday, the 28th of July. We didn’t want the excitement to die down, and since our products were basic and did not need consumer enlightenment, this worked. We began by sending e-mails to everyone, and invited the faculty of Jaipuria Noida by distributing fliers to each one of them. Of course, our attractive posters were pasted across the Jaipuria Noida campus as well.

We made one big mistake, though; once the event began, we realised that we had underestimated our customers… and ourselves. In fact, we had played it too safe. When we think of it today, we realise that we could’ve made a killing on Friendship Day. Our stuff – including the friendship bands – was sold out in no time! There were a few other things we noticed, which could’ve make things smoother for us. For instance, we could have kept a dustbin handy, put up some banners and posters near the counter, thereby channelising potential customers towards our stall. Maybe we could have advanced our Promotions by a few days as well.

All said and done, this was a big confidence booster for the four of us. We got a very good response from the market, and as and when opportunity comes our way, we’ll scale this stall up by adding more products, and use this experience to make things smoother.

Our revenues from this initiative are being donated to a charitable trust. We hope that next time around we make more money out of our venture to serve this noble cause better!