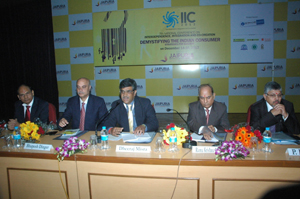 The Guest of Honor of the much awaited conference was Mr. K.T.S. Tulsi, Senior Advocate, Supreme Court of India. He is known for his tireless efforts in getting justice for the Uphaar Tragedy victims. Welcoming the distinguished guests, Dr. J.D. Singh, Director General, Jaipuria Institutes of Management talked about the drivers of change of consumer behavior being income level, gen next, urbanization and consumption style and how updation and innovation is going to help the Indian marketer in present context.

Mr. K.T.S. Tulsi started by emphasizing that no amount of FDI can bring prosperity unless we strengthen the criminal justice system of the country. According to him, law should be simple yet succinct. He noted that the delay in meting out justice has led to crime becoming a “low risk, high return business”. According to him, the fact that only 27% of all filed cases actually go to trial, has led to corruption galloping and entering all fields, from top to bottom. He said that India should use its technological competence to drive out the old bullock-cart system still haunting its judiciary.

In his inaugural speech Hon’ble Mr. Razi talked about the challenges ahead of the Indian marketer owing to the diverse culture and the changing patterns of purchase decisions. He said that though India lags behind China in various fields including education, the change can be brought about by addressing it positively. He called upon the youth and elderly of the country to be equally adaptive to advancement in technology so that any generation gap could be minimized.

The day two of the conference covered sessions on sessions “Trends Shaping and Changing Market Dynamics”, Blending Modern Sophistication of Urban with the Traditional Rural Markets”,

The first session was moderated by Dr. J.D. Singh, Director General, Jaipuria Institutes of Management. Mr. David Wittenberg, CEO, The Innovation Workgroup started the discussion by saying, “Technology is great when it works”. He went on to elaborate how FDI in modern retail, social networking sites and economic transformations will affect the 4Ps of marketing with relation to Modern Retail. He concluded by saying that “Innovation is important as innovation creates differentiation’.

Mr. Ved Krishna, MD, Yash Papers took over from him and talked about “Evolving Ecological Packaging”. He said that a lot of adversities being faced by the world both geographically and demographically can be eliminated by the use of biodegradable cellulose in manufacturing paper and related products. He concluded by saying that his company has been constantly working towards it.

Dr. Kamal Ghose, Director, Symbiosis Institute of Management, Bangalore focused his discussion on how to “Enhance the service brand for the Indian consumer”. He talked about how brands can bring about change keeping in mind the distinctive customer experience that they need to deliver.

Dr. J.D. Singh concluded the session by saying that in Indian context, fostering emotional relationship with the consumer is important since 95% of the decisions of Indian consumers are emotional rather than rational. According to him, e-commerce can be translated into easy commerce if used intelligently.

The second technical session was dedicated to “Trends shaping and changing the market dynamics “. Beginning the session, Mr. Nikhil Sharma, Partner, MART, India pointed out that there is huge opportunity in rural markets of India but there are certain factors that marketers need to keep in mind in order to tap those markets. Distribution and pricing are as important as is understanding of the fact that rural population is not as homogenous as it appears at the superficial level and in a few years’ time, their household spending will equal today’s urban levels. According to him, local customization, innovative technologies as HUL’s Project Shakti and below the line media activities will collectively contribute towards effective rural market expansion.

According to Mr. Sandeep Mathur, Senior VP, DCM Sriram Consolidated Ltd., the major problem is of incorrect interpretation of customer requirements. To support this observation, he cited examples of Bajaj Scooters which discontinued production of scooters terming it obsolete, not able to foresee the surge in scooter market which took place later on. He said that positioning for each market needs to be done differently. He emphasized the importance of “Luxury Segment” as SEC-A household is growing in India.

Dr. Rajiv Thakur, Director, Jaipuria Institute of Mangement, Jaipur was the moderator for the session.

On the concluding day the third technical session was commenced by Dr. Dheeraj Mishra, Dean, Jaipuria Institute of Management, Lucknow, who delivered a brief introduction of the topic “Gearing Services Sector for the New Millennium”.

The session was taken forward by Mr. Prabhakar Dalal, Executive Director, EXIM Bank of India, who talked about “Recent developments in India’s international trade”. He further elaborated on how India and China have been able to sail through in the high tide of 2008 recession. According to him while FDI has been a major contributor to China’s success, for India, its rising exports have played a major role.

The talk was carried forward by Mr. P.K. Anand, Executive Director, Punjab & Sind Bank when he took the stage to talk about “Challenges in HR and Marketing in Banking sector”. He spoke about how it is important with the changing market dynamics to blend technology with the “Generation C” who will be more demanding in the future. For this generation, “Banking is necessary but Bank is not”.

The session was then continued by Mr. Bhupesh Dinger, Director, Enrich Salons and Academy, featured as a Top Young Achiever in Business India, who mentioned that the present day consumer is an omni-channel user who is looking for options. He closed by saying that effective mix of online and offline media and consistent customer service can together meet diverse customer expectations today.

The final talk of the session were delivered by Prof. Ram Krishna Mandan, Consultant, Lanco Infratech Ltd, who shared the statistic denoting that Indian middle class is set to grow from 50 mn to 583 mn by 2025 and to catch the pulse of such a diversified segment, adequate marketing research on part of marketers will play an important role.

The first speaker of the session was Mr. Sampath Kumar, CEO, Rajiv Gandhi Mahila Vikas Pariyojna (RGMVP) who started by mentioning how his organization is working towards reducing financial disparity in Indian society which has its roots in patriarchal denomination, casteism, corruption & illiteracy. He explained the methodology employed by RGMVP wherein they promote micro savings by self-help groups which are further lent to the members in need. He informed that Rs. 202 crore has been disbursed in loan by this method.

The second speaker of the session, Mr. Rajesh Toshniwal, CEO, Toshniwal Industries struck a chord with the students by sharing experiences from his B-school days. In the same vein, he also mentioned that no B-school can teach as much as customer interaction can. He ended by saying, “Change can bring innovation” and “opportunities are aplenty, one just needs to bend a little and make the most of them”.

Mr. Prasanna Singh, COO, Banyan Netfaqs, started on a positive note by advising the students to “work on your strengths so much that your strengths can overpower your weaknesses”. He mentioned how organizations can be run successfully by cross-training the workforce instead of the entire process being centralized and being dependent on a few people. He exclaimed how the smart phone generation has access to every piece of information and can keep itself abreast of latest happenings around the globe.

Mr. Himanshu Manglik, Sr. Manager, Corporate Media Relations, Nestle India echoed the words of the previous speakers when he stressed on the fact that with economic reforms, extensive media exposure and rising disposable incomes of the people, it has become almost imminent for marketers to devise strategies based on extensive research of consumer insight and emotional quotient. He further opined that the marketer needs to focus more on the pull strategies.

Dr. J.D. Singh, Director General, Jaipuria Institute of Management welcomed Justice Bhanwar Singh, Chairman, Judicial Training & Research Institute and summarized the proceedings of the two days. Justice Singh, in his valedictory address, shared the incidents that led to the creation of Consumer Protection Act and how effective it has been to safeguard the rights of the modern day consumer. Prof. Himanshu Misra, Convener, IIC-2012 and Faculty, Marketing at Jaipuria Lucknow delivered the vote of thanks.