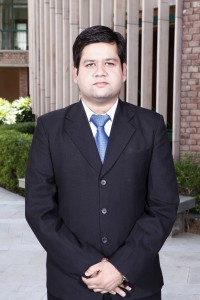 Amit Mathur works at the Jaipur branch of the Indian Overseas Bank as an Assistant Manager in the marketing department. This makes him part of Jaipuria Jaipur batch of 2011 alumni body, whose members spread across India. He keeps in touch with his friends via different social networking sites, video chatting, email and of course, phone calls. They support each other by comparing their new jobs and actively discussing growth prospects. A sense of community is not all Amit has retained from Jaipuria. He feels that learning is a continuous process, and Japuria has taught him to perform his best and not think of the result. It has also strengthened his belief that good and hard work pays off. Through a large number of projects at college, be it the NRHM-UNICEF project at Sawai Madhopur, RUIDP project at Jaisalmer, KGK and RSRTC, he got exposure to the latest technology and learning’s. One memory that stands out for him is getting a standing ovation from the director and other members of KIIPL (KGK) for his project, which gave him a great sense of confidence. Amit feels lucky to be able to carry these qualities forward into his professional life.

However, after leaving Jaipuria, Amit learnt a few harsh lessons of professional life. His first company did not give him the exact job profile he wanted, and he had to take the difficult decision to resign in order to join the Indian Overseas Bank. In those moments of despair and frustration, Amit found that he could lean on old teachers like Professor Bhargava, and other classmates. In times like this, he also felt grateful that he had taken a class on Social Responsibility, taught by Dr. Ritu Singh, which made him sensitive to other people’s problems, especially the underprivileged. Even today, he spends time with students of various special schools through some NGOs and tries to bring some joy to their lives by celebrating several occasions with them.

Amit feels as if every moment spent at Jaipuria Institute of Management, Jaipur was tremendous for him and that he enjoyed every second spent on campus. He feels it is not only academics in which Jaipuria is far ahead of other institutes, but also in the exposure provided to students in those two years. Another highlight for Amit was when he conducted Association of Asian Pacific Operational Research Societies APORS 2009 under the able guidance and leadership of director Dr. Subhash Dutta. The 5 days of APORS was fabulous for Amit and he worked round the clock to make it a successful event. He met a number of senior officials and researchers who are pioneers in their fields, and learned a lot from them. It is for this, and many other reasons, that he will always look back at his time in Jaipuria with great fondness.