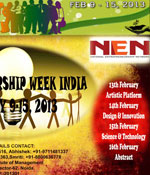 Amidst the fun and learning, ‘Women’s Safety’ acquires central focus

Despite it being a Saturday, Noida woke up early on the 9th of February 2013. The satellite city of New Delhi reverberated with the insistent, collective voices of the youth of Jaipuria Institute of Management chanting, “We want safety; we want pride”. The management students of Jaipuria were taking part in the ‘Grand Marathon’ of the much-awaited ‘Entrepreneurship Week’. The E Week of Jaipuria Institute of Management, Noida had begun… and with a bang!

“We organised a massive signature campaign at TOT Mall, Sector 62, Noida, on the 2nd day of E-Week, the 10th of February. But that was not all,” said Sonal Saxena, the coordinator of the event. “We gave the Grand Marathon event a ‘women’s safety’ theme as well; it became an extension of our ‘safety for women’ signature campaign. The marathon started with the pledge of E-week initiated by the E-leader, Ms. Akanksha also a student. Students holding banners and chanting slogans spread the message around Sec-62 to make everybody aware that Jaipurians stand for women’s safety. A healthy number of employees from the National Institute of Chartered Accountants also took part in supporting Jaipuria Noida’s message.”

The events so far have been a mix of fun and learning, but social activism – especially women’s safety – has clearly been prominent this year in this annual extravaganza organised in collaboration with National Entrepreneurship Network (NEN). With the first three days dedicated to ‘E-Arena’ – which focuses on innovations in sports – and CSR, this event has already seen a lot of activities…. and it’s still only half-way through.

Championships events have been conducted so far in Computer Gaming (Counter Strike – Fire in the Hole), Aerobics, Women’s Cricket, Kho-Kho, Sports Quiz and Kite Flying as well! Woven within all this fun was an amazing interaction with one of the best-known sports managers in the country, Mr. H.P. Singh Rishi, Deputy Director General, Organizing Committee Commonwealth Games, Delhi 2010. Mr. Rishi spoke with urgent necessity for the need to clean up sports management. Recently in the news for his book, Sports Scare – The Ghost That Haunted Commonwealth Games Delhi, Mr. Rishi enlightened the students on how the noble concept of sport had been brutally assassinated under the guise of Commonwealth Games Delhi 2010.

“The interaction with Mr. Rishi was extremely depressing and motivating at the same time,” remarked Anuvriti Singh of Jaipuria Institute of Management. “He exhorted us to look very seriously at avenues in Sports Management, as the domain needed fresh young managers to run things in an organised manner.”

Traditionally, one of the most anticipated activities in ‘E-Week’ is the film screening and appreciation event. Last year, this event saw management lessons in the movie ‘Real Steel’. This year, ‘Goon’ a 2011 comedy directed by Michael Dowse, starring Seann William Scott and Liev Schreiber, made the cut at E-week. The main plot of the movie depicted an exceedingly nice but somewhat dim-witted man who becomes the enforcer for a minor league ice hockey team. The movie goes on to show how the protagonist brings the wisdom of his domain (he is a ‘Bouncer’ at a bar!) to turn around the fortunes of the ice hockey team.

“That’s why the opening day of E-week is always great fun!” exclaimed a smiling Rohit Sharma, who coordinated this event. “Students began rolling in at 11:45 am, and the movie began at 12:15pm. It was nice to have Professor Moid Uddin Ahmad to explain how the movie, in its essence, dealt with the finer points of management.”

Easily the most ‘green’ event of Day 2 (10th of February) of the ‘E-week’ was the Tree Plantation initiative. Students of Jaipuria Institute of Management, Noida worked in groups of five towards a greener landscape, starting within Jaipuria Noida campus itself.

“The students of Jaipuria Noida worked in coordination with a few teams from the neighbouring ABES Engineering College as well,” explained Deepali Srivastav, the student coordinator for this event. “It was a great event and attracted many students as well as onlookers, who joined us on the spot.”

E Week is held across the country, building support for entrepreneurs while encouraging them to launch start-ups. Jaipuria is one of the central institutions for the E-week. And going by the thumb rule that ‘a job well begun is half done’, E-week this year is all set to be a thumping success at Jaipuria Institute of Management, Noida.