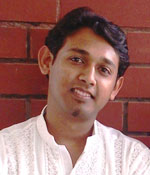 Shreyas Saundattikar was born and brought up in Indore. After his schooling from Vidya Sagar School, Indore, he completed his Engineering (Electronics and Instrumentation) in 2009 from Rishiraj Institute of Technology, Indore. He also began a career in Marketing with HCL Infosystems in Indore itself. So when the time came to do his post graduation in business administration, he saw no reason to step out of his native city. The presence of a quality business management institute in the form of Jaipuria Institute of Management, Indore only made the decision easier for him.

“Before enrolling for the 2012-14 PGDM course, I got the opportunity to explore Jaipuria Institute of Management, Indore. I realised that the institute had some of the finest faculty of anywhere in the country and great infrastructure. Being a part of the prestigious ‘Brand Jaipuria’ would also be an honour for anyone. Despite being from Indore, I chose a residential program at Jaipuria Institute of Management because I thought it would give me a 24×7 exposure to constant learning.”

Shreyas speaks highly of his seniors, who have been of great help whenever he has sought guidance. Being a hosteller, he feels as if Jaipuria Indore is a second home to him now. To him, the most enjoyable activity in Jaipuria Indore so far has been decorating the entire institute for Diwali. In the short span of four months, Shreyas has already found various platforms to showcase his talent.

“We recently had a poster making competition for the Finance Conclave of Jaipuria Indore, on the theme of ‘Rendezvous with the Fast Moving Financial Market’. My poster was adjudged the best. I also enjoyed taking part in the dance competition in ‘Jaipuria’s Got Talent’. The crowd response was really encouraging.”

A well-rounded personality, Shreyas’ interests range from creative pursuits like painting, sketching, wall art and singing to astrology and tarot card reading as well. While in school, he had played badminton at the district and state levels. In fact, in the past, he had already won a national level competition for poster making, organised by the UNFPA.

“It is absolutely clear to me that Jaipuria Indore has everything that makes a great B-School. It is the perfect place to chisel the intellectual dimension that lies within every student and thus, add wings to the dreams of several budding entrepreneurs and professionals. Here in Jaipuria Indore, when we have guest speakers in the campus and when their thoughts and ideas relate to our own, it is an incredible feeling. It motivates me to be like them and create a name for myself.”

Shreyas Saundattikar believes that Jaipuria Indore is the best thing that has ever happened to him. He is positive that two years down the line, he will get placed better than he would have prior to joining Jaipuria Institute of Management, Indore.