January 24-25, 2014: Jaipuria Institute of Management, Indore, organized and implemented a two-day CSR initiative with the objective of improving the traffic situation in Indore. The initiative, named ‘Better Traffic in Indore’, was conducted in association with the Indore Traffic Police. Prior to the event, students were given traffic related training by the Indore traffic police at the Traffic Thana in Indore.

During the event, students, wearing Jaipuria t-shirts, in teams of four to five were stationed at ten major traffic junctions of the city. 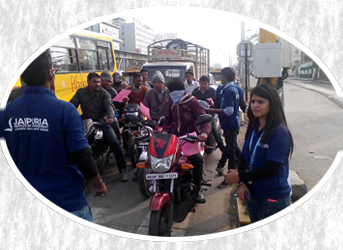 Banners carrying the theme of the event were displayed near the students’ positions. At their respective traffic junctions, students handed chocolates and Jaipuria pens as a token of appreciation to those who followed safe traffic norms, such as wearing seat belts or helmets. Traffic violators, on the other hand, were provided with pamphlets that contained statistics of road accidents in Indore, as well as appeals to follow traffic rules. Some students went a step ahead and asked many who were not wearing seat belts to wear seat belts; the motorists, surprisingly, agreed to do so! At other junctions, students were seen taking an active role in managing traffic, which included making drivers stop at red light signals. The Indore traffic police constables at the traffic junctions served tea to the students in appreciation of their service. The ASP, Indore Traffic Police, and Ms Anjana Tiwari, who personally witnessed the actions of the students, appreciated their efforts. The event also received press coverage in some newspapers in the city.