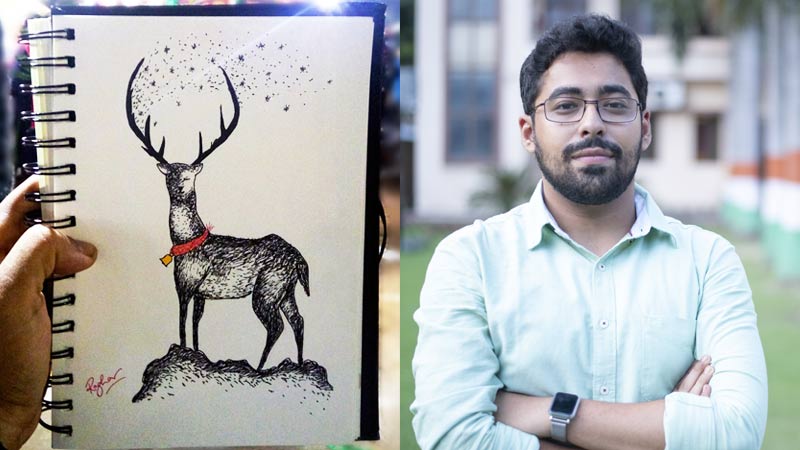 “An Artist by Passion, a management student by profession”

Raghav, born in Allahabad and brought up in three metro cities has been an absolute inspiration for following his passion and profession altogether so gracefully. Like every artist seeks for Muse around him, he has found it in the ghats of Ganga, his friends from Mumbai during graduation, the sunset in the streets of Prayagraj and his long-lost childhood sweetheart from Kolkata. At a very early age, he had been taught the importance of being self-sufficient by his father and he remembers painting since the age of 4 and escape through them. Sometimes he would exhibit them and sometimes he would simply bask in the honor of his art. After being asked to rate himself as an artist he says “I would like to rate myself as what people want me to be rated. I can’t rate the things I think and make.”

Joining the PGDM class of 2019-2021 of Jaipuria Institute of Management, Lucknow, Raghav Kakkar runs a much-followed Instagram handle today by the name of Imperfect.it. “I started the handle in the year 2015. I wanted a place to express my inner thoughts and emotions through my sketches. If you follow my paintings, you would find me in all of them. And imperfect.it was made to encourage people to think about their perfections and imperfections and grow from them. I wanted them to know that they are not alone in their journeys of self-explorations,” explains Raghav. His paintings are his Escape. But, an artist like Raghav Kakkar doing in a PGDM classroom? Pat comes his reply- “a PGDM has been a well-decided route-map for me. I wanted to see how I could make my passion and profession converge in meaningful ways. And that’s how this diploma is relevant!”

At a latest workshop in Change Management, the speaker had put up an intriguing question- how can a parent company help in improving management with it’s newly owned subsidiaries? And he realized that Mismanagement was the problem in the case. And he aptly pointed out one of the solutions from a very creative angle- “the parent company should re-launch itself and make new vision for the whole firm. They could take the initials of the subsidiaries and add in their own name. And doing that, people would work towards a single direction and everyone would be integrated within a single process.” Indeed, management itself is an art and Raghav proves it over and over again! Be it putting a special aesthetic touch on the mundane presentations or helping friends with logos for their startups and projects, he tries to blend his educational qualification with that of his innate talent to make things work out for himself and people around him. However, where exactly has Raghav set the bulls-eye?

“I want to start something of my own where I can actually use the power of digital to transform my sketches to extraordinary ends,” mentions the freshman with a note of sheer excitement in his voice. He recently attended a lecture of a Digital Expert in the Jaipuria, he has been motivated by his mentors and professors at the B-School to bring out the best version of himself.

So, here’s to the boy who thinks he has lesser blood in his veins and more of ink in him! He makes us feel that the sky is the limit. Here’s to the boy who feels contended knowing he has got air in his lungs and few plain sheets of paper, may the world be his oyster. Here’s to Imperfect.it and all its amazing followers who believed in perfections in the beautifully imperfect things in life! Here’s to Art itself!