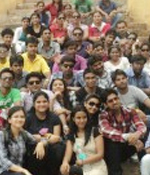 Jaipuria Institute of Management, Jaipur has recently welcomed the 2012-14 batch of Post Graduate Diploma in Management (PGDM) students. On the 7th of July, 2012, these first-year students were taken on a trip around the landmarks of Jaipur, to help them understand the Pink City better. Anmol Agarwal and Prateek Shukla, both students of PGDM 2012-14, take us through their first tour of the city.

Prateek – I think the trip around Jaipur was really cool. What do you think?

Anmol – Awesome and unforgettable! I learned a lot of things, and enjoyed myself a lot. In fact, I woke up very early in the morning that day simply out of excitement. The first stop – the Kagazi Industry – made me realise that you don’t necessarily need crores to start a venture; it can be done with scrap as well.

Prateek – Very true. In fact, I had no idea about the process of paper-making. When I came to know that they make paper with old clothes and waste paper, it amazed me. I think this was the quickest way I could figure out the real idea behind the word ‘recycle’. As a management student, I feel very lucky that Jaipuria Jaipur started us out with this visit. I’ve got the message loud and clear that good entrepreneurship is all about a good idea, some managerial skills, innovation and the ability to take a calculated risk.

Anmol – How did you like Amer Fort? I found it absolutely fascinating!

Prateek – Same here. I could almost imagine the Rajput Kings treading across the fort walls. I think one look at the glorious fort was good enough to understand the ancient Rajputana culture. I could imagine how difficult it must’ve been for an attacking army to get past the moat and climb the wall to take control of Amer Fort.

Anmol – Absolutely. The amazing part was moving straightaway from Amer Fort to the huge Pink Square Mall; seemed like travelling in time from the 16th century to the 21st century. In fact, on the way to the Pink Square Mall, I was going blind with hunger! I was unable to see the beauty of Hawa Mahal or Jal Mahal clearly…

Prateek – I know. The way you rushed up to the food court at Pink Square Mall said it all! But I really liked Hawa Mahal and Jal Mahal. They were so different from Amer. The Queens must’ve really enjoyed staying surrounded by water. Of course, there was a military reason for this. The water body around the Jal Mahal acted as an obstacle.

Anmol – I really would like to know more about how the Jal Mahal was constructed. I’m sure I’ll get a lot of opportunities to do that in the two years at Jaipuria Institute of Management.

Prateek – Sure. I guess this was just the trailer. The Birla Mandir was a nice place to signoff for the day. It’s always great to start something new with the blessings of the Gods.