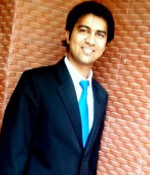 “I consider myself really lucky” says Anant Chaturvedi, who is yet to attend his PGDM Jaipuria convocation and has already bagged his dream job as Executive – Campus Relations, at India HR Network, Noida.

Hailing from the princely state of Jodhpur, Anant was sceptical pursuing CA along with his Bcom (in Jodhpur) which seemed to be a popular trend among his friends at that time. Instead, he chose to follow what he terms as his ‘networking interests’ and started to work in the field of marketing alongside his graduation.

‘I’ve always been good around people’—holds for Anant true, ashe has scores of friends and acquaintances from all walks of life to boast of (a great sales and marketing skill). Interestingly, his gift of gab also landed him his first job with a FM radio station in Jodhpur during his Bcom days. Anant, being a frequent caller at that particular radio station, soon chatted up to become friends with the RJ. That RJ then went on to invite Anant to visit his radio station. A visit turned into a job-offer, as the radio station soon beckoned him to join their marketing team. Not only that, in the next few months Anant went on to manage the marketing efforts of 3 other radio stations and a Cinema hall around Jodhpur region.

A self-professed way-wanderer, Anant went on to seek the guidance of his elder brother to apply for his PGDM degree. Subsequent to scoring a decent 80 percentile in his MAT, he chose Jaipuria Noida as a better option over other Universities. Not only had he heard about its reputation, he also knew that the faculty there was superb.

Along with studies, life at Jaipuria was lots of masti and lots of fun! Of course the regimen of a fixed schedule and classes makes the student what they are, but for Anant, the entire journey meant earning a degree and a higher degree of relationship making.

Poised with confidence, he adjusted well to life in Delhi and campus life in general. Today, he keeps in touch with almost all his friends, through the popular social networking site, Facebook.

Anant went on to do his internship with retail brand, Provogue.

Executive, Campus-Relations, India HR Network, is Anant’s current designation. As the title suggests he is instrumental in ice-breaking through new relationships at college campuses and getting to sign on Btech students for placements across different companies.

And the ‘icing on the cake’ for Anant is – he can steal a visit to his Jaipuria campus once in a while (because his office is in Noida itself) and meet his Kanchan ma’am for a quick hello!