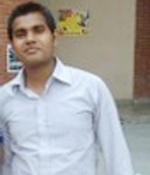 Amit Kumar is back from Jaipuria, Noida, to his hometown Bhopal, enjoying the company of family and friends. They of course are still in a state of disbelief over the change that they see in the shy, introverted Amit Kumar who had bid farewell to them to study Business Administration at Jaipuria, Noida.

Amit Kumar is the cynosure of every eye in Jaipuria, Noida, having landed a coveted job with Berger Paints.

“Berger has a very structured and exhaustive recruitment system, which happens in three phases. It consists of everything ranging from online application short-listing, to video interviews, to face-to-face interviews. The best gift that I received from Jaipuria, Noida,is the power to analyse; something which was non-existent in me till graduation. At the end of the two years at Jaipuria, Noida, I was able to relate different things and events, something which came really handy in cracking Berger. Despite being from a science background, the confidence with which I handled questions relating to HR, Finance andmacro and micro economics, was all due to Jaipuria, Noida.”

Had it not been for a friend’s timely advice, Amit Kumar would never have found himself inJaipuria, Noida.

“My friend introduced Jaipuria, Noida to me as one of the topmost B-schools in the NCR. I paid a visit to the campus and was thoroughly impressed by the infrastructure and the faculty. But the reason why I zeroed in on Jaipuria, Noida amongst the choice that I had, was the fact that it was the only B-school which was interested in knowing, what I wanted out of a PGDM degree. The rest of them were more inclined to letting me know what they expected out of me.”

Amit credits his internship with Kohler India – a brand name in bathroom and kitchen fittings – for helping him validate a lot of Marketing and HR wisdom that he had picked up from the classrooms of Jaipuria, Noida. The grind at Kohler – the work culture and environment – exposed him to the ground realities. Amit especially remembers playing an active part in organizing the annual function of Kohler, where their latest products were showcased to their distributor and retailers.

“Jaipuria, Noida is simply fantastic. It manages to strike the right balance between studies, fun, and co-curriculum. You are at liberty to explore the learning method, best suited for you.There are activities at Jaipuria, Noida to help you sharpen the skill-sets required in the corporate world, as well as numerous platforms where you can display your abilities.

Amit believes that the sheer diversity of the students at Jaipuria, Noida is a great education in itself; sooner or later, everybody finds like-minded colleagues to hang out with. He believes he too has found a set of 5 to 6 die-hard friends at Jaipuria, Noida.