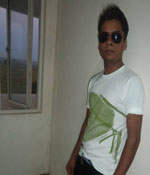 One look at Abhishek Pratap Singh – a first year student at Jaipuria Institute of Management, Indore – and you know that he is a sportsman. With over 38 ‘Man-of-the-Match’ awards at the Under-17 level, Abhishek has played cricket for Uttar Pradesh at the national level and has had the honour of being a part of the Republic Day parade. Abhishek credits his family’s army background and army school education for his discipline, dedication and ability to work hard.

“I joined Jaipuria Indore with the aim of being a part of a prominent MNC. My ultimate ambition is to start my own apparel designing business and be a prominent business personality. I selected Jaipuria Indore because I believe that it can help me fulfill my ambitions. Jaipuria Institute of Management has a wide range of academic disciplines, trains you to multi-task and provides lot of opportunities. It offers a course that is especially relevant for future entrepreneurs.”

Abhishek is quite active on the extracurricular front… and not just in the sports field.

“Jaipuria Institute of Management has helped me discover a side to myself that I never knew existed. I recently won the runner-up award in the ‘Rocket Singh’ competition, which is a hard-core salesman’s competition. I have been representing Jaipuria Indore in management games and business quizzes all over the country.”

Abhishek believes that Jaipuria has given him a lot, and changed him in many ways.

“I have begun to understand how professionals and businessmen think. I learnt a lot from all the speakers at the ‘Demystifying the Budget 2012-13’ conclave at Jaipuria Indore recently. The thoughts of Mr. Arif Shaikh, CEO, Entertainment World Development, were especially impressive.”

Abhishek believes that the seniors at Jaipuria Institute of Management, Indore have helped him immensely – not just in understanding the finer points of the curriculum, but also at a personal level.

“I am really thankful to Anmol Mathur and Himanshu for their support. I am eternally grateful to them for being such great seniors. The faculty members at Jaipuria Institute of Management, Indore are amongst the best I have ever seen. They are masters of their fields. Each and every faculty member works hard to develop our skills, leaving nothing to chance. They are loving and caring.”

Abhishek concedes that his ambitions and expectations of himself were not always as high as they are now. He points out that it is not just about having confidence in oneself, but also in the institute one comes from. In this regard, he is positive that Jaipuria Indore will give the right direction to his career.