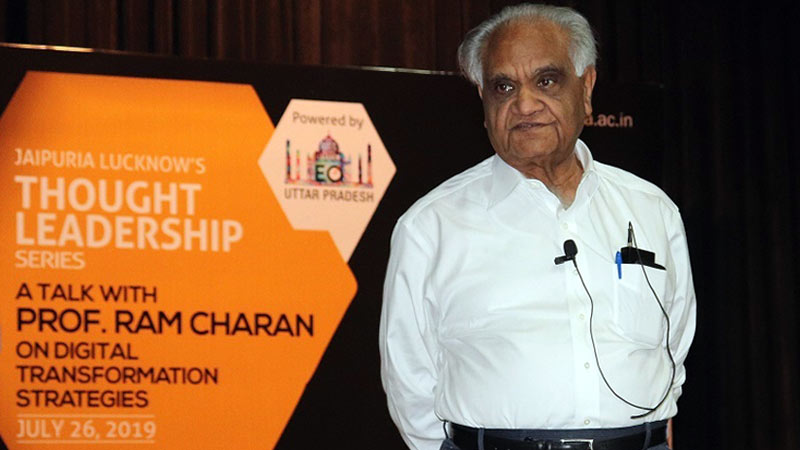 Prof. Charan is the most renowned and influential consultant. He has trained Chief Executive Officers of renowned companies worldwide and serves board of many companies in various countries. He has written close to 25 books and more than 2 million copies have sold.

Talking about his journey from Hapur to Havard University he added that he still remembers his initial days of learning at Hapur on slate and chalk and considers it to be most learning and influential phase of his life. He still considers his childhood teachers to be the best one and added that the role of teacher is to build the capability and capacity of his student.

During his discussion with the students he added that there is no substitute for hard work and he still remembers during his internship period in engineering how he worked in 2 shifts to learn maximum. He further added success and development is progressive and is a continuous journey so one has to keep learning. He shared a 3 point principle with the student, select 3 focus area in your life and put 2/3 of your time in achieving the same. Focusing on the role of communication for managers he added that for achieving success in life one has to be a very good listener and should listen to the opinion of other person without interrupting in between, once he has completed the counter points may be raised but first one has to ensure that he has understood the opinion in all respect. During discussions never let any negative thing come to your mind. He further added that self-confidence holds the key to success and whenever you feel confused or in problem seek help from other. He also focused on importance of peer learning and its importance in life.

Speaking on the success and failures of organizations he said right people for the right job is one of the most fundamental and most violated norm of business. For success of any organization it is crucially important that people with right kind of desired skills are assigned the right kind of job. Together people will design the system and an efficient system will ensure success. He added that people are the biggest asset for any leader or an organization.

Speaking on the role of internet and its impact on business he added that new age organizations like Amazon, Netflix, Uber etc have grown from nowhere to fortunes in one decade only. Good leader should be able to visualize the future like Steve Jobs visualized that every office desk will have a computer or Uber visualized that how they can match driver with passengers with min hassles.

He further added that lot of organizations fail not because of poor strategy but because of poor execution. He added that 80% of energy of leaders should go into execution and execution only. He also provided a guideline for successful execution which starts with a clearly defined goal, clarity of goal is most critical here as choosing wrong goal might lead to failure. Once the goal has been decided now come the strategy part wherein one has to define the critical tasks and each task a Directly Responsible Individual (DRI) is identified and accordingly the Key Performance Indicators are defined. In today’s time another important factor is transparency of systems within the organization wherein technology can be leveraged in for of Dash Boards to ensure free flow and ease of access to information.

The talk was attended by delegates from various educational institutions, delegates from industry, bureaucrats from Public Sector and other renowned dignitaries from Lucknow.