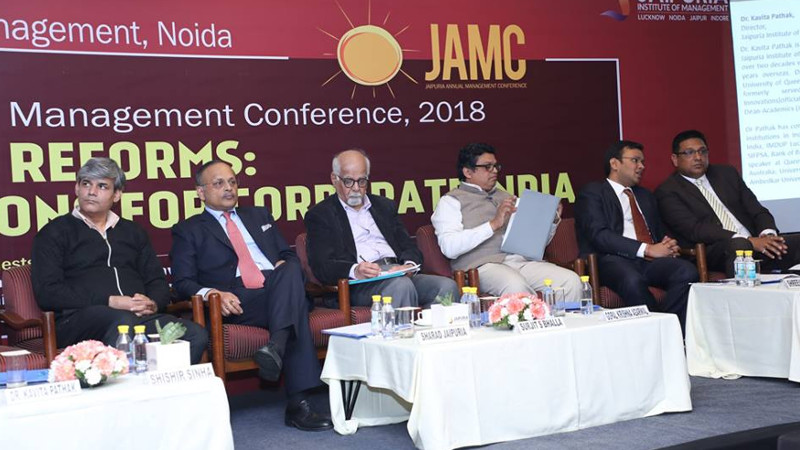 Jaipuria Institute of Management, Noida held their first major event of the year with its 7th Jaipuria Annual Management Conference (JAMC 2018) at the India Habitat Centre, New Delhi. Looking at the changes in economic policies the country is going through, this year’s JAMC focused on “Economic Reforms: Implications for Corporate India”. The Chief Guest was Mr. Suresh Prabhu, who due to pressing engagements could not make it to the event. He however, sent a video message for the audience, which was screened. The Guest of Honour was Mr. Surjit S. Bhalla, Chairman Oxus Research and Investment. The other dignitaries on the dais were Mr. Vijay Rai, MD – APAC & EMEA Markets, NHRDN Delhi chapter, Mr. Shishir Sinha, Business Editor – ABP News Network, Mr. Gopal Krishna Agarwal, National Spokesperson BJP, Mr. Sharad Jaipuria, Chairman Jaipuria Group, Mr. Shreevats Jaipuria, Vice Chairman Jaipuria Group and Dr. Kavita Pathak, Director JIMN. Guest of Honour, Mr. Arjun Ram Meghwal, Union Minister of State for Water Resources River Development could not join the event but sent his message for the audience. 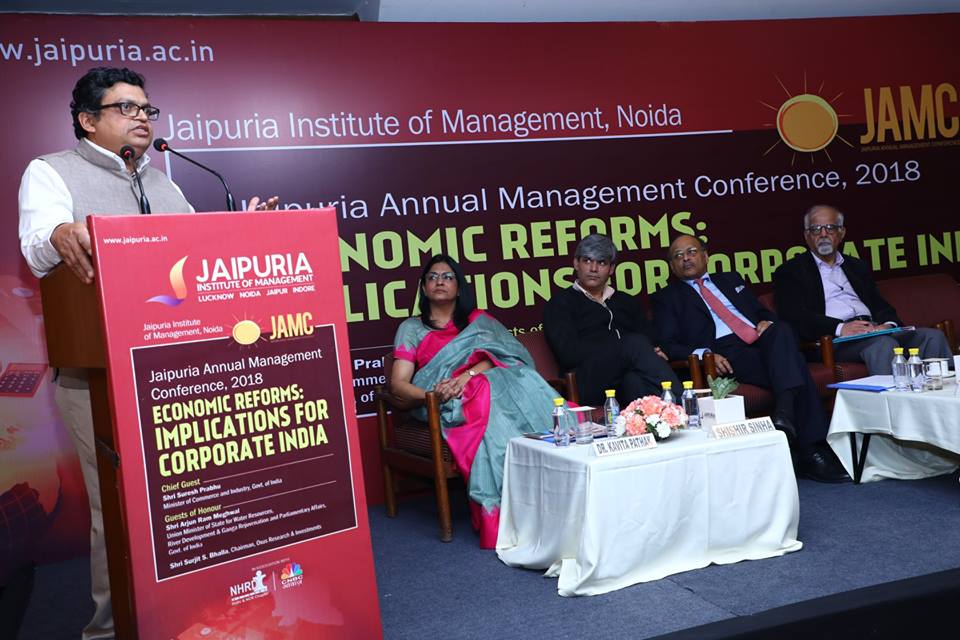 As the dignitaries settled themselves for the conference, Dr. Banasree Dey, faculty member at Jaipuria Institute of Management, Noida , set the event in motion beginning with the traditional lighting of the lamp. Dr. Kavita Pathak introduced the conference theme to the dignitaries and participants giving them a brief history of JAMC since 2011 and how such events strive to make sense to the business world and its policies. Shri Sharad Jaipuria, Chairman Jaipuria Group, welcomed and introduced the guests on the dais to the participants and emphasised on policy makers deliberating and discussing the economic issues of the country. With this, the conference discussions commenced. Shri Vijay Rai took the discussion towards government initiatives to aid different sectors of the economy. He also talked about the technological opportunities the IoT and AI will provide towards economic growth. Next, Mr. Shishir Sinha talked about the history of government economic reforms from LPG in 1991 (Liberalisation, Privatisation and Globalisation) to LPG in 2016 which came about under the Pradhan Mantri Ujjwala Yojna Scheme which has more to do with human interface as opposed to the earlier one which dealt with hard core economic reforms. He also spoke about various scams in the stock market, Dematerialisation of accounts, Dot.com bubble etc. all resulting in reforms which are inclusive and which could only happen if these reach to the last person in the society.

Shri Gopal Krishna Agarwal, in his address, talked about the reality of government economic reforms and its challenges such as displacement of agricultural labour and ease of doing business for the manufacturing sector. Next Mr. Surjit Bhalla talked about future budgets being on expenditure reforms which should concentrate on three most critical areas of Agriculture, Education and Health. He gave many examples in his talk citing examples from World Bank and other reports, thereby clearly bringing out the differentials that exist between India and other world-wide countries. On the corporate taxation front he spoke about some mega moves which would be required to spearhead India, though steps have started in that direction by the present Government. The moves so required pertain to tax rates being effective, tax compliance being higher and real estate rates being lower. Even in the higher education system a lot needs to be done as colleges and universities need to hire better teachers and finance the education of the lower half of the society both in terms of fees and scholarships? This, he said, would spread inclusiveness across the board. 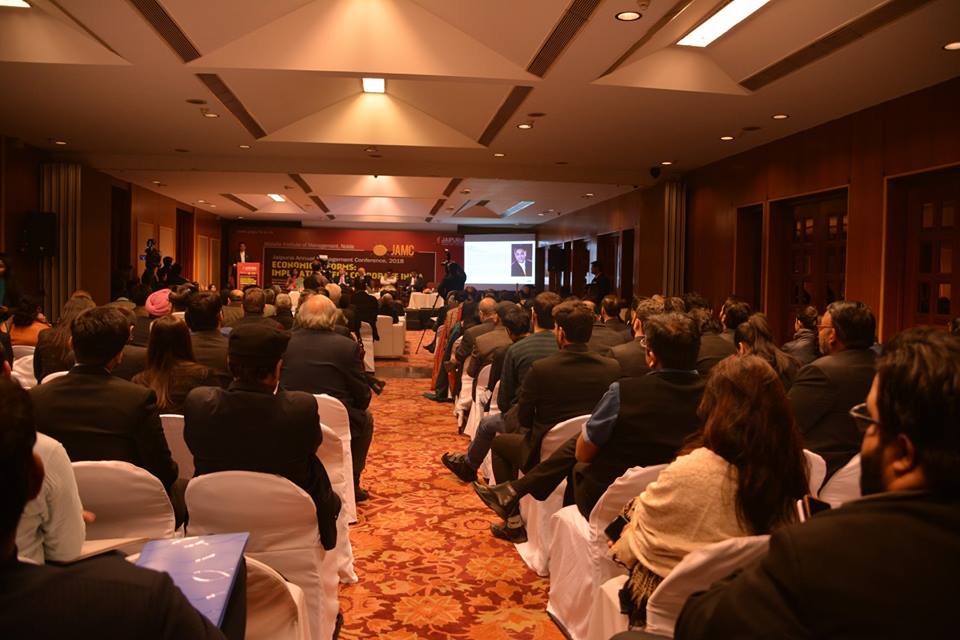 The panellists brought to the fore several key areas which need to be looked into, reforms which have been undertaken and their impact on corporate India including some corporate and public perceptions. The deliberations kept the audience engaged and this could be seen from the participants coming forward with questions to the panellists in the end. Ms. Mughda Mishra coordinated the session well and involved each of the speakers by raising some key and pertinent points to each of them.