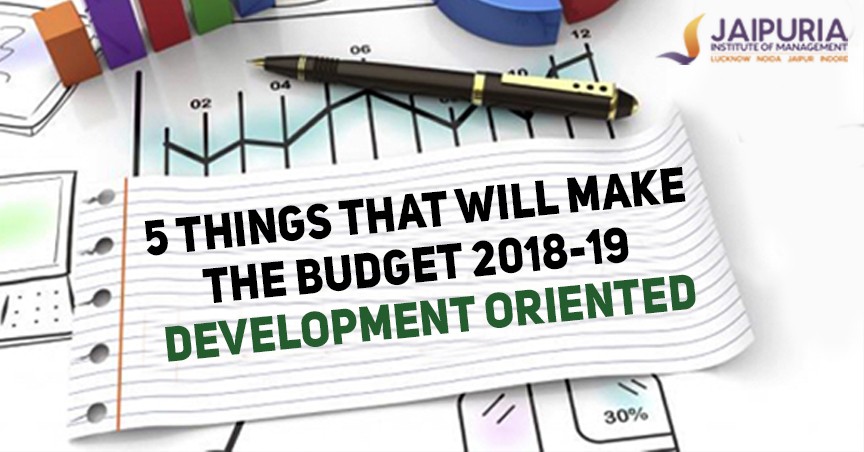 Many would expect the budget 2018-19 to be a preparatory exercise for 2019 election and hence a populist budget, however, making this budget a pure development and economic reform oriented would serve the twin purpose of development as well as populism. Here is a list of 5 things the FM may like to consider.

More than anything else, it looks like that the people of India would value development as the most populist appeal. Given the current state of our economy, ‘budget for development’ needs to focus on two dimensions—‘growth’ at macro level as well as ‘development’ at micro level. The first is about overall performance of the economy in terms of growth rate and how it may sooner returns back to 7+ range. The micro dimension of growth is more about focusing on employment and income creation at the grass root along with rural and agriculture upliftment. The last 3-4 years have seen breath-taking and super active policy reforms. There has been big ticket reforms in the economy and at least four such reforms have been—Demonetization, GST implementation, UID, and System of Direct Benefit Transfers. These reforms represent ‘policy activism’ of the government which is a big departure from the long standing ‘policy paralysis’ regime. Good thing is that the pace and intent of reforms have not slowed down and there is a great deal of consistency. This indeed has paid off in terms of rebounding of macroeconomic performance which further needs to be supported and boosted by the budgetary measures. Some of the indicators of recent macroeconomic performance can be outlined as follows:

– Forex reserve has increased from 288 billion in May 2014 to 399 billion in November 2017 which is a good indicator of stability and sound economic management.

– Foreign Direct Investment has moved up from 36 billion in 2014-15 to 56 billion in 2016-17 and with opening up of 100% direct investment in single retail chain, it has the possibility of going up further. Lot more can be expected to come about from ASEAN nations in view of recent outreach on Republic Day by inviting 10 heads of ASEAN countries.

– Riding on high sentiments, Sensex has moved up almost 40%. The stock market buoyancy has witnessed a surge in corporate bond market, primary market, and a rise in public issues. Inflow to mutual funds have seen marked improvements. Good news is that premium deposits on insurance has increased significantly.

– Exchange rate of Indian rupee with UD dollar has been fairly stable, ranging from 58.78 to 62.02 which is marked departure from the regime of high fluctuation. This has given a fair amount of stability to market and exports.

Notwithstanding, there are concerns for the economy which need to be addressed. Retail inflation is one major concern. This is hitting the poor at the grass root. Rural employment is yet another concern. There is a great deal which needs to be put in place for doubling the farm income by 2022. No doubt, the per capita income in the economy has increased but as the data recently presented by World Economic Forum suggests that there is high concentration of income happening.

Given the above backdrop, the 5 big things which the budget may focus is as follows:

1. Ease out income tax rates: Good news is that GST revenue collection has seen a reversal in December suggesting that the transition issues are waning away. There has been 7.3 % growth in GST revenue, up from 80,808 crore in November to 86,703 crore in December. The number of taxpayers reached 1 crore by January 24, out of which 17.1 lakhs are composition dealers, which are required to file returns every quarter. The GST collection is likely to go up by 20-25 % in view of e-way bills, which will track the movement of trucks and help check revenue leakage. With the rise in income tax payers as the tax-base expands, tremendous growth in tax revenue, and rise in GST revenue flow, it is imperative that the budget must announce big reduction in personal as well as corporate income tax rate. Personal income tax at highest income slab may be brought down to 20 % and tax exemption limit must be raised substantially. This will boost expenditure and private investment in the economy in a big way which will further propel production, jobs, and growth rate. This would prove to be a better private expenditure boosting measure than awarding pay commission hike without a commensurate rise in productivity which often leads to inflation.

2. Curb retail inflation, boost agriculture: Food inflation is at the core of retail inflation which is rather linked to reduction in public investment in agriculture since mid-80s. There has been a big gap between farm gate price (wholesale price) and market price (retail price). This needs to be checked by the state governments. The wholesale inflation has increased marginally from 3.24% in last August to 3.58% in December, while retail inflation is up from 3.36% to 5.21% during the similar period. This is just a matter of better market and inventory management and regulating profiteering between crashing price at mandi due to oversupply and higher price in retail market for consumers. The budget should announce an ambitious plan for rural and agriculture development, rural roads, agriculture warehousing, and better market management.

3. Boost manufacturing, skills, and jobs: The long term growth of the economy would depend largely on how manufacturing will perform. Budget must make provision and plans for a big push to ‘Make in India’. The budget will do better by allocating large funds towards revival and growth of small and medium enterprises. The budget may also provide a further boost to enhance the culture of start-ups. Skill mission needs to be linked with sustainable job creation.

4. Bring about more institutional reforms: Institutional reforms have worked quite well for the economy and it has created grounds for economic reforms to produce good results. Institutional reforms provide much needed support to economic reforms. This is one of the biggest achievements for Indian economy in recent times. It has resulted in upgrading of ratings by Moody’s investors service, for the first time since 2004 citing continued progress on the national’s economic and institutional reforms. Moody’s rational for upgrading highlights structural changes in the economy and apart from boosting sentiments for higher private investment, on practical ground it also allows Indian companies to raise debt overseas at lower interest rate. Yet another positive development for India has been improvement in Doing Business Index. There has been a big jump in Ease of Doing Business from 130 to 100. India has shown improvements on six out of ten aspects of Doing Business which is indeed an indication of the fact institutional and administrative reforms are taking place. Improvements on indicators such as ‘getting credit’, ‘protecting minority investors’, and ‘paying taxes’ are fundamental to business and it is likely to support long term economic reforms to produce fruitful results. The budget would do a lot better if it takes this agenda of institutional reforms further.

5. Make educational reforms a priority: The future of a nation would largely depend upon the quality and access of education it provides. This is one area where the government must think of making a big difference. Instead of opening new institutions, it would be far better if big allocation is made on improving the quality of existing institutions. Teachers training and induction must be priority areas. Government should also think of a mentoring system wherein private and public institutions can work together towards quality improvement. There is also a need to harmonize education, employment, and citizenship through classroom as well as outside the classroom programs. A part of budget must be allocated towards outside classroom engagement programs, social and rural internship programs. The budget can also take cognizance of inculcating ‘life-skills’ among students and allocate budget towards life-skill building programs and provision of ‘life-skill coach’ in schools and colleges.

Our Prime Minister Shri Narndra Modi in his opening address at World Economic Forum’s Davos meet focused on three challenges—Climate Change, Terrorism, and Anti-Globalization and spelled out Indian stand as proactive, reformist, and open-minded. Indeed, the ensuing budget would be a testimony of this commitment and also an opportunity for the government to make development work for everyone. The budget 2018-19 must act as a foundation stone for ‘New India Vision’.