The First Women’s Convention was organized at Jaipuria Institute of Management Indore on March 8, 2014.The theme of the event was “Role of women Empowerment in uplifting the society”.

Under the Guidance of Dr. J P Upadhyay, the First women’s Convention was coordinated by Dr. Priti Bakhshi and Dr. Romi Sainy with the support of all the Faculty and staff members.

Madam Sumitra Mahajan was the Chief Guest for the Convention. She is an Indian politician and a member of the Bharatiya Janata Party (BJP) political party. Currently, she is a member of the 15th Lok Sabha of India. She has been representing the Indore constituency of Madhya Pradesh since 1989 at 9th Lok Sabha. She contested and won first time Lok Sabha Elections in 1989 and she has bought many projects for Indore from Railways, Aviation, Urban Development Ministry . She is known for simplicity, honesty and clean politics. She has a clean track record and has always maintained distances from Special Interest Group. She is popularly known as Tai (Sister).

All the empowered women who attended the convention were welcomed in a traditional manner and the participation saw a wide variety that includes Politician, Socialist, Retailer, Beautician, Designer, Doctor, Teacher/Professor, RJs, Models, Industrialist, Film Director, etc. 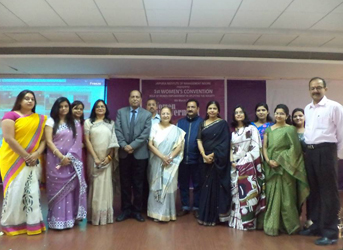 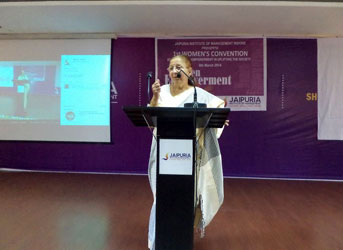 Director, Dr. J.P Upadhay addressed the gathering and shared that we are celebrating this fest to flag the significant of women empowerment, today women is in every sector of our lives. He said that there is more success in those areas where women are there but more progress is required. He also shared that Jaipuria Indore is doing well because most of the faculty members are females.

Dr. Romi sainy took over the session and showed a video on the life of women. She shared some famous saying that there is always a woman behind the success of a men, the objective of the event is to take inspiration from your life. She also shared the purpose of the convention.

Dr. Priti Bakhshi talked about Mompreneur (Mom + Entrepreneur) and discuss about its benefits and limitations and shared what Jaipuria can offer to various women present in the convention in terms of MDP/Training, Consultancy/Project Report, Mentoring, E-Commerce, Scaling Up, Market Survey/feasibility study, etc. to overcome the limitations.

Then our honorable Chief guest of the day Smt. Sumitra Mahajan – Member of Parliament, interacted with gathering saying that women believes in karma, a women is always physically and mentally balance and responsible. We should encourage women not to belittle men but to make her realize her own abilities. We should take time for us and do what we like. She also said that it is not today but every day is a women’s day.

The ninth issue (March 2014) of “The Indore Pride Magazine” was unveiled by Mr. Anurag Gupte (CEO, Editor The Indore Pride). This issue is dedicated to Empowered Women of Indore Region and Jaipuria Indore has supported them in the same.

Dr. Yogeshwari Pathak, Director – Prestige Institute of management said women should grab the opportunity when we have. She talked about the meaning of empowerment, it is to instill power. Power can change, power can expand. She shared a story of women empowerment in Chhattisgarh. She also shared few lines with us “Alone she must conquer or alone must fail, she alone can save herself and save her world” 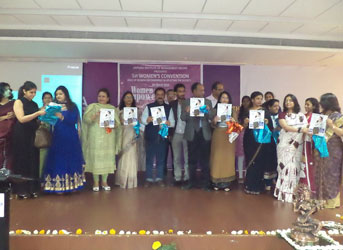 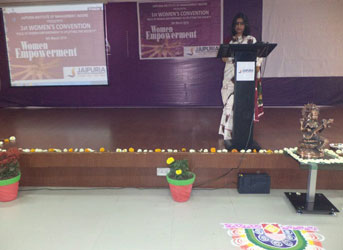 Mrs Ritu Grover, a well known socialist shared that we should take the responsibility to make our home perfect, we should instill ethics and values in our coming generation whether they are girl or a boy. Prime duties should be filled in order to have success.

Mrs. Marry from Vedanta group said a educated women can educate the whole society. Then a presentation by Ms. Madyantika Baira sharing that women should know her rights and should organize herself.

Then Director & founder of Mansi Beauty Academy, Mrs. Unnati Singh added that beauty lies in attitude, how we perceive the world, It will us serve in that way only.

Then Mrs. Vinita Raj( Indira Group, Indore) introduced the contributor in the magazine” The Indore Pride” and they are awarded on behalf of Jaipuria Indore. Famous personalities like Ritu Grover, Unnati Singh RJ Shruti, Rj Tina, Nancy Sood and many more has contributed and were awarded by Jaipuria Indore.

The event saw participation from 100+ empowered women of/from Indore and most of them shared their experience. The event was highly appreciated by one and all present including Mrs. Sumitra Mahajan and she also shared that along with the event, the infrastructure and employees of Jaipuria are also very good. Most of them said that they will love to visit Jaipuria campus again and again.